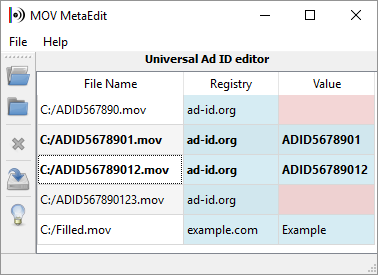 MOV MetaEdit is a tool that supports the embedding and editing of metadata in MOV (Apple QuickTime) or MP4 (ISO/IEC 14496-14 a.k.a. MPEG-4 Part 14) files. It is currently focused on Universal Ad ID metadata but could be expanded on request.
Sponsored by Ad-ID; designed, led and fully developed by MediaArea.
Universal Ad ID is visible in MediaInfo, with the possibility to automaticaly extract it in XML with the command line.
Download MOV MetaEdit
Download MOV MetaEdit
Version 17.10.1
Other versions (packaging, OS, interface...) are also available (

MediaInfo can extract such metadata.

Currently available only from the command line version, developped for an anonymous sponsor who did not need of a GUI.
It is possible to embed or edit "pasp" atom as well as the width scale in the "tkhd" atom.

It is Open-Source software which means that end users and developers have freedom to study, to improve and to redistribute the program (MIT license for the code developed by us).