The QCTools preview window is intended as an analytical playback environment that allows the user to review video through multiple filters simultaneously. Often inconsistencies within the graph layout may be better understood by examining those frames in the playback window. The playback window includes two viewing windows which may be set to different combinations of filters. This allows a user to playback a video by multiple forms of analysis simultaneously just as viewing a waveform and a vectorscope side-by-side or seeing the video with highlighted pixels that are outside of broadcast range while seeing the waveform display.

This selection will launch the Playback Filters window where you may review the documentation.

This option enables you to remove one display, thereby only showing one view. This option allows a single playback window to occupy a greater amount of screen-space.

This view simply shows the video as QCTools interprets it, no special effects or filtering are added. In this view, however, you also have the option of enabling a ‘Field’ display which splits the two video fields for the selected frame and displays them as discrete images. Thus all odd-numbered video lines appear are resorted to appear on the top of the image and the even-numbered lines appear on the bottom. Since many analog video issues occur differently between the two interlaced fields, splitting the fields into two distinct images can make it easier to see if a given issue is from problems with the analog video playback device (such as a head clog where the two fields would react very differently) and tape damage (where the two fields would react similarly).

This image shows two Normal displays side-by-side where the right image has ‘Field’ enabled. By viewed the fields separated on the right, it is easily clear that while field 1 was read correctly from the tape, there was no color data was read for field 2. This issue was due to a head clog and fixed by cleaning the video player and re-digitizing the content.

This filter selects the bit position of each plane for display. Selecting ‘None’ for a plane will replace all values with 0x80 (middle gray for Y and no color for U or V). Selecting ‘All’ will send the display plane as is. Selecting ‘Bit [1-8]’ will display only that specific bit position of each pixel of the plane. For the Y plane a pixel will display as black if that bit is ‘0’ or white if that bit is ‘1’. For U a pixel will be yellow-green if ‘0’ purple if ‘1’. For V a pixel will be green for ‘0’ and red for ‘1’. Generally lossy video codecs will show blocky structured patterns at higher numbered bit positions. See the bit plane article in Wikipedia for more information about the application of bit plane filtering. 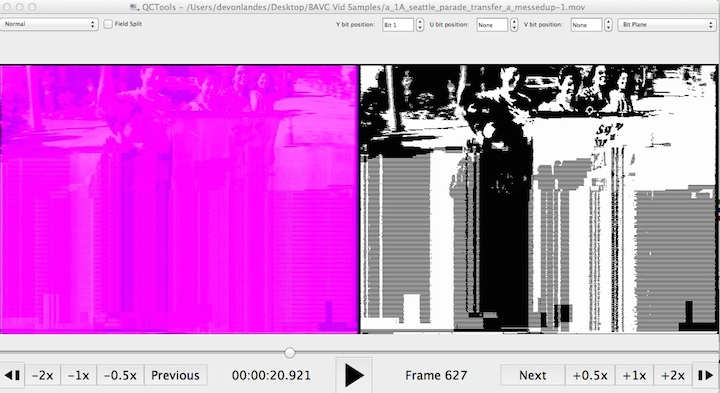 (Video sample and permission to use provided by seattle.gov)

This filter is similar to Bit Plane, but it shows a section of each of the first 10 bit planes at once in the selected plane. The slices are presented in most-significant to least-significant order as left to right (or top to bottom if ‘Rows’ is selected). Each of the 10 bit planes is marked by a green border.

This filter is similar to Bit Plane, but instead of showing if the selected bit position of a selected plane is set to 0 or 1, it attempts to predict if that bit represents signal or noise. This filters uses a method for calculating this by comparing each pixel’s selected bit (X,Y) to selected bit of three adjacent pixels (X-1,Y), (X,Y-1) and (X-1,Y-1). If the bit is the same as at least two of the three adjacent bits, it may not be noise. A noisy bit-plane will have 49% to 51% pixels that are noise.

This filter displays the YUV plot of a selected bit position. Note that because this filter requires more than one frame to display the filter will need to be in playback mode to reveal an image.

This is the same presentation as ‘Normal’ except that pixels that are outside of broadcast range are highlighted as white. Again here, you have the option of selecting ‘Field’ to display field 1 (top) and field 2 (bottom) separately.

This filter enables the hue and saturation levels to be adjusted. Hue adjustments may be expressed in degrees where 0 is no change and 180 would invert the color. For saturation a value of 1 needs the saturation unchanged, 0 removes all color, and the saturation may be increased up to a maximum of 10. The chroma values (Cb and Cr) may also be shifted by increasing or decreasing their values (similar to Red Shift/Blue Shift on a time-base corrector).

Allows for playback in various color spaces, including BT.601, BT.709, SMPTE240M and FCC. The filter includes a Reveal slider so that the original image and a version interpreted through the selected color matrix may be shown side-by-side for review.

This filter interprets potential VITC and EIA608 (often referred to as line 21) data to display the values stored as timecode and/or captions. By default the top 30 lines of video are assessed for this data but the scan_max option can adjust the number of top lines to assess from 1 to 100. EIA608 data will be shown in hexadecimal form along with the number of the line (counting from 1 as the top line). There is a ‘zoom’ option which will crop and scale the selected lines so that they can be viewed in more detail. If VITC or EIA608 data is not found then hyphens will be shown instead.

For more information, see the documentation on FFmpeg’s readvitc and readeia608 filters. A sample IMX file with both VITC and EIA608 data is available at the Internet Archive.

This filter extracts a specified video plane (such as Y, U, or V) which represents the luma or part of the chroma data from the video so that it may be reviewed on its own. The filter also may apply histogram equalization to redistributes the pixel intensities to equalize their distribution across the intensity range (this feature can help exaggerate or clarify the details of the plane image). This filter is useful for detecting lossy compression in video signals or establishing provenance.

This image shows the Normal display on the left and Extract Planes on the right. The Extract Planes filters reveals the macroblock pattern of lossy MPEG2 compression in the square patterns throughout the image.

This filter is similar to the Extract Planes Equalized filter but shows the two chroma planes (U and V) side by side.

Displays a user-defined “tiled” mosaic of successive frames. Maximum 12x12 grid. Note that because this filter requires more than one frame to display the filter will need to be in playback mode to reveal an image.

The histogram shows the frequency of occurrence of values per channel. Typically the histogram will show one graph per channel (one for each Y, U, and V or one for each red, green, and blue). Video with a lot of contrast and a well distributed range of luminance values will result in a histogram with an even spread. You may also select ‘Field’ option which will depict fields 1 and 2 separately (field 1 on top, field 2 on bottom).

Allows a user to select one line of video signal to display as a waveform. Includes ‘Vertical’ and ‘Background’ modes. When ‘Vertical’ is enable the user may select to plot a waveform of a single column rather than the default plot of a single row. The ‘Background’ option shows the frame image under the waveform with the highlighted row or column highlighted in yellow. 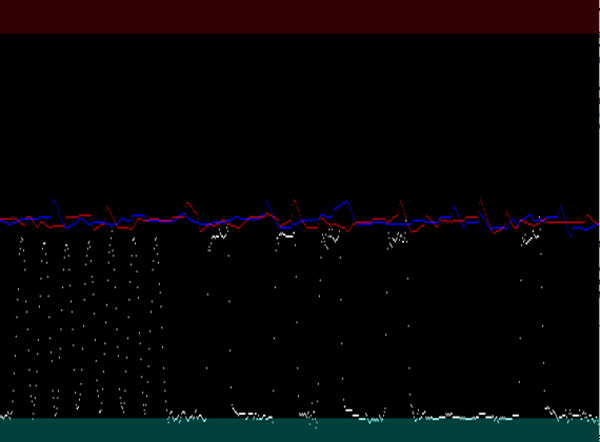 Displays an image by subtracting the offset level from each successive pixel.

This filter operates similarly to Color Matrix but shows the original image alongside a version interpreted through a selected sample range. Here you can see how the video would look it interpreted as either full range or broadcast range.

Displays an image obtained from the temporal difference between successive frames. Note that because this filter requires more than one frame to display the filter will need to be in playback mode to reveal an image.

This filter selects a video plane and highlights values with a specified range of minimum value to maximum value. The original image of the plane will be presented in grayscale and values within the range will be highlighted as yellow; for instance to highlight Y values below NTSC broadcast range, set plane to Y, min to 0 and max to 16. The resulting image will highlight Y values below broadcast range in yellow.

A vectorscope display. This display plots chroma values (U/V color placement) in two dimensional graph (which is called a vectorscope). It can be used to read of the hue and saturation of the current frame. The whiter a pixel in the vectorscope, the more pixels of the input frame correspond to that pixel (that is the more pixels have this chroma value). The V component is displayed on the vertical (Y) axis, with the bottom edge being V = 0 and the top being V = 255. The U component is displayed on the horizontal (Y) axis, with the left representing U = 0 and the right representing U = 255. Six blocks are highlighted to depict standardized color points for red (90, 16), green (54, 222), blue (240, 146), cyan (166, 240), magenta (202, 44), and yellow (16, 110). All valid chroma values fall within a circlular shape from the center to the outer edge of the plot.You may also select ‘Field’ option which will depict fields 1 and 2 separately (field 1 on top, field 2 on bottom). 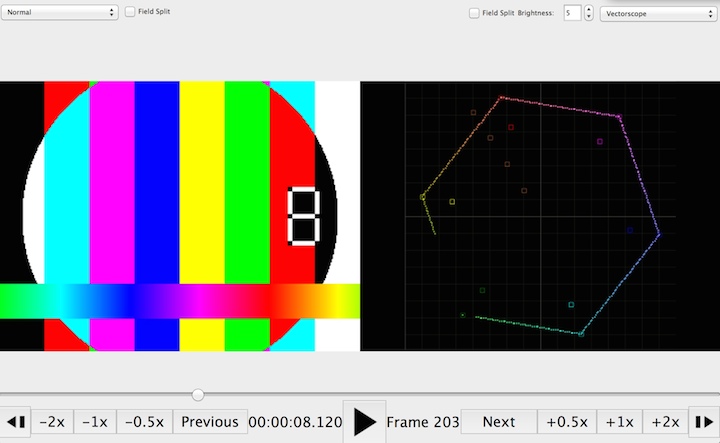 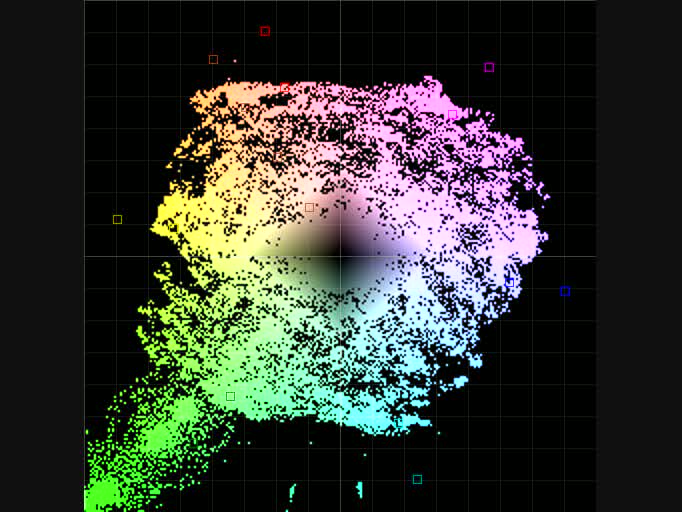 The waveform plots the brightness of the image, each column of the waveform corresponds to a column of pixels in the source video. The pixels of each column are then plotted in an 8-bit scale (0-255) which is equivalent to 0 to 110 IRE. The range from 0-16 (0 to 7.5 IRE) is highlighted in blue and indicates a black value that is below traditional NTSC broadcast range. The range from 235-255 (100 to 110 IRE) is highlighted in red and indicates a white value that is above broadcast range. For most analog media the intended pixel luminosity values should exist between 7.5 and 100 IRE. You may also select ‘Field’ option which will depict fields 1 and 2 separately (field 1 on top, field 2 on bottom). 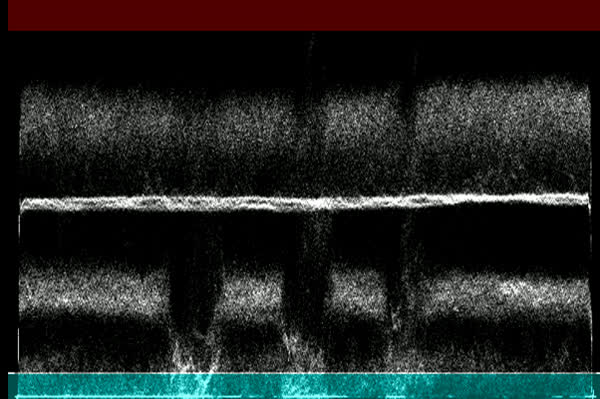 This filter plots the Waveform and Vectorscope on top of each other so that both are shown in one display. The brightness of both the waveform and vectorscope may be adjusted for clarity.

The Waveform Target is similar to the Waveform filter but a box is drawn over the image by setting an x and y coordinate and size of the box. The waveform image drawn will depict the waveform plotting of only the samples within the box. The original image may be shown as a background to the vectorscope by enabling the ‘Background’ checkbox.

Allows a user to zoom to a particular portion of the image using X and Y coordinates. Includes “Strength” and “Intensity” modes.

Displays a visualization of the audio spectrum. Note that because this filter requires more than one frame to display the filter will need to be in playback mode to reveal an image.

Displays a visualization of the audio waveform. Note that because this filter requires more than one frame to display the filter will need to be in playback mode to reveal an image.

Displays a real time graph to observe the loudness evolution. The main graphing area contains the short-term loudness (3 seconds of analysis), and the gauge on the right is for the momentary loudness (400 milliseconds).

Displays a visualization of the audio as a musical scale. See FFmpeg’s showcqt documentation for information and examples.